Amelie Watts is sick and tired of being treated like a child. She might be willowy and delicate, but she has strength of the kind that doesn’t show on the outside. Plus, she learned all she needed to know so she could cope on her own. Now, if only her big brother would finally release her inheritance! She would fly to the Bahamas and kiss the backwater she grew up in goodbye.
Jason Watts is fed up with picking up the pieces of his little sister’s life. If only she would grow up already and learn to live life without stabilizers! Her latest idea is insane, and bound to be her most enormous failure to date. But how to make her understand?

Enter Rob Tyson, incorrigible bachelor and Jason’s best friend. For a laugh, they make a bet. Two people, a hastily acquired boat, and a tropical paradise. What could possibly go wrong? 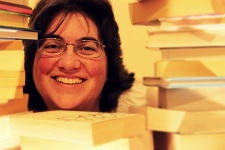 Ella Medler is a U.K. author and editor who lives in a corner of Heaven, on the south-west coast of Ireland, overlooking the Atlantic. She writes fiction in many genres – some after her own tastes, and some to make her readers happy. Sometimes, those two happen to coincide. Whatever the genre, her books are action-driven, and well-developed characters are her forte.

A fierce supporter of genuine talent, Ella Medler founded Paper Gold Publishing because she believes there are authors out there who deserve a chance to shine, authors who would otherwise fall between the cracks of a crumbling, forever-shifting industry. Feel free to join the site to access free resources, take part in competitions and enter your work in box sets and anthology collections.

As an editor, Ella Medler has the tendency to nit-pick on plot issues while ignoring the type of rule that doesn’t allow for a sentence to be finished in a preposition. If you want to win her over, make sure your books are action-packed, your characters real, and you bring chocolate.