Twisted Bloodlines
Twisted Bloodlines #1
By- Linda Jackson
Genre- Paranormal Romance
Megan has never had what most would call a normal life.
Her childhood and teen years were spent on the run with her family, hiding from a horror so great it defines their world. Friends and homes are traded at a moment’s notice to escape from their worst nightmares.
Years pass, and her mother settles down with her new step-father, a kind man who does his best to protect them. Life lulls into a safe pace, and Megan finally feels as though she has control of her future for the first time in her life. But that peace is shattered with the arrival of a new family member, one that bears a striking resemblance to a savior of her past…
Confused by her deep emotional connection to him, things unravel fast. She learns that the people she lives with, even her own family, are not what they seem. Her only friend who helped her piece her life back together changes overnight, and she is left dealing with the fallout on her own…
As events unfold, Megan finds herself face to face with the horror that has haunted her since childhood. But will she be able to escape from her twisted bloodline?

Conceived From Evil
Twisted Bloodlines # 2
By- Linda Jackson
Genre- Paranormal Romance
Having been rescued from a living nightmare by her newfound friends, Callie tries to come to terms with what was done to her. Distraught with the way she feels towards one of the residents in her new home, she finds herself the object of another unwanted affection as things soon spiral out of her control.
Finding out she is no longer the orphan she thought she was, her family begin to creep out of the woodwork. She soon realizes they are more terrifying than the beast who lives in her nightmares. With her enemy list growing by the minute, Callie finds out she is not so different from the people around her as fiction becomes reality, leaving Callie, and those she loves, fighting… for her life. 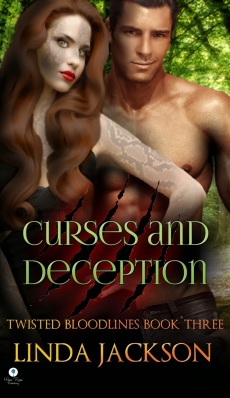 Curses and Deception
Twisted Bloodlines # 3
By- Linda Jackson
Genre- Paranormal Romance
After the dramatic rescue of Megan, Trey wakes up to find himself held prisoner, trapped in a dreary dungeon with the beast inside of him bound. Being away from the chaos of his everyday life, he has a chance to get his head on straight and figure out how to tame the wolf. Or so he thought. His dungeon cellmate has captured his attention, and the beast inside is far from happy about it.
With a battle of wills raging inside, Trey and his cellmate attempt to escape the dungeon, but it’s only the first hurdle. With time ticking against them, they make their way through the maze ahead, desperate to escape. Will Trey get to explore his feelings towards her?
Or will the beast scare her off for good?

Please tell us about yourself using 3 verbs, 1 quirk and a pop culture addiction

Describing myself in just three verbs I would have to go with: I write, read and clean.

One of my quirks would be that I have to have things tidy. I clean my children’s rooms even the teens. I like things to go where I put them. I’ve often been know to put things away like toys, even if they are still being used.

The Walking dead is my pop culture addiction at the moment. I love that series.

My top five favorite things are:

What are your thoughts on book covers- in your opinion do they make or break a book?

Well the cover is usually the first thing you see so if it’s really unapealing then that is a turn off, but I always check out the blurb and reviews so I wouldn’t say they make or break a book. If pushed to choose I would probably go with make, especially if buying in a store since it would be the first thing to catch your eye.

Do you have any advice for anyone that would like to be an author?

It’s very time consuming being an author and if you have a busy house like mine, then at times it can become difficult. You do have to become a social butterfly, making contacts and joining groups, but this can also help you out especially when you meet other authors who can guide you through confusing times especially if you’re new to it. You also have to be able to handle criticism which is unfortunately part of the package along with possible bad reviews. But even through all the hard work and trying times, it’s worth it in the end to hold your finished book in your hands and see what you have accomplished.

About the Author-
I love to write, always have done since I was a child. I also love to draw anything and everything! Reading is also my passion as is music.My first book in my paranormal book series is due out on 5th June 2013, published by Moon Rose Publishing.
Links-
Goodreads- https://www.goodreads.com/author/show/6535389.Linda_Jackson
Amazon- http://www.amazon.com/Linda-Jackson/e/B009FIS9PG/ref=ntt_athr_dp_pel_pop_1
Twitter- https://twitter.com/lindajackson41
Website- http://about.me/linda_jackson
Blog- http://lindajacksonblog.wordpress.com/
Twisted Bloodlines Website-  http://twistedbloodlines.blogspot.co.uk/
Facebook- https://www.facebook.com/TwistedBloodlines
a Rafflecopter giveaway