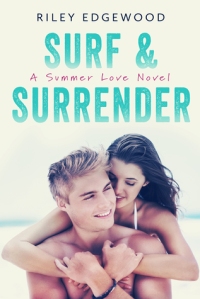 She wants to forget he ever existed. He’d never give up her memory.

Quinn Westwood is completely over Sawyer Carson. He broke her heart years ago and disappeared from her life without a word. So yeah. She’s over him. Never even thinks of him. In fact, she’s spending her college summer break surfing and lifeguarding in the Outer Banks, while nursing a bruised heart from a different relationship gone wrong. She doesn’t have room in her mind or heart for Sawyer—until she runs into him at a beach bonfire and the sparks that fly between them are way hotter than the flames heating the sand.

Sawyer never got over Quinn. The only thing stronger than what he feels for her is the secret keeping them apart, but sharing it would destroy more than just his life—it’d ruin hers, as well. Still, he can’t seem to keep away from her, can’t seem to keep his hands off of her soft, tempting skin. Especially since she has even less self-control when it comes to reigniting the physical side of what made them perfect together.

But secrets have a way of slipping out, and when Sawyer’s is revealed it threatens to shatter everyone involved. He’ll have to face walking away a second time, and Quinn will have to decide if fighting for him is worth it when the fallout could affect more than just her heart, but also those of the people she loves most.

Surf & Surrender is the second book in Riley Edgewood’s Summer Love series, but can be read as a stand-alone novel. 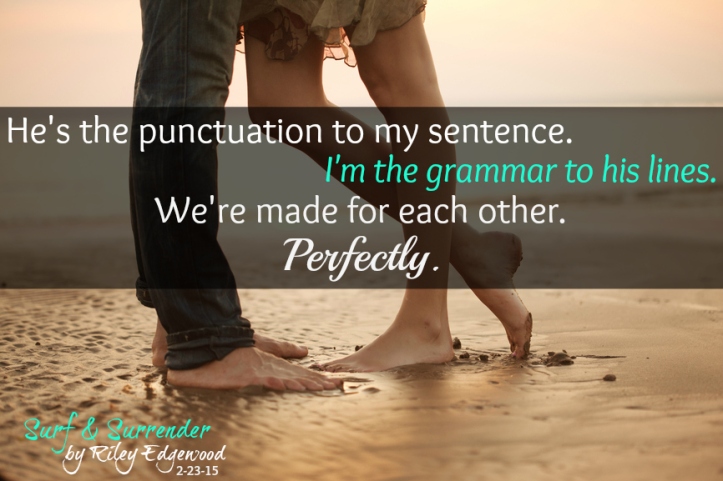 “Lay off me.” My brother fights my grip, but I’ve got two inches and thirty pounds on him. Plus, I’m sober. And pissed.

I push his face closer to the stuff that’s already permeating through my entire car. “What did I tell you about throwing up in here?”

He’s really grappling against me now. And I’m really not budging.

“Let me go and I’ll tell you about Quinn.”

This—the shock jolting my system—loosens my grip more than anything else could. “What?”

He turns his face sideways to look up at me. I give him that much leeway. Because I’m still not sure I heard him right. Then he says, “I saw Quinn.”

Fragments of memories barrel through my mind so fast I almost lose my breath.

Long, slender fingers tracing hearts against my callused palms. A white daisy tucked into hair that’s brown like autumn and windblown and trailing down her back for miles.

The somehow both sweet and rough scents of salt water and sand. Laughter like sea glass wind chimes spinning in the breeze.

I want to ask where? How? When?

I want to crack his skull open and climb into his memory to see her again.

I rub my face with my free hand to wipe it all away. “Goddamn it, Jess. She’s the one person I told you we couldn’t see if we came back.”

“Two,” he slurs, squirming on his knees. “Two people.”

Jesus. Just her name in my brain is enough to make my gut jump.

So I let go of Jess’s neck.

He face-plants into his own puke and comes up spitting, swearing. I shrug and try not to laugh at the horror in his expression. It’s hard. Which means I’m out of the grip of the past. “You wanted me to let you go, so I did.”

I can’t deny it. Instead, I grab a beach towel from the backseat and let him use it to wipe off his face—and then my car. He gags the entire time, and nothing could bring me more pleasure.

“How’d she look?” I ask a few minutes and miles later. I don’t expect an answer. The kid’s eyes are closed so hard they look swollen.

“You sure you weren’t just looking in a mirror?”

He mumbles something I’m pretty sure is, “Fuck you,” but I let it slide because I’m remembering in more than just splinters of snapshots. More than a hand or a laugh. Quinn.

Stupid? Not a chance in hell.

One of us would’ve run into her sooner or later. The Outer Banks is a big area, but the spots locals prefer are few. I’m surprised it’s taken the two months it has.

Thing is, though, if it happened to Jess, then statistically my chances seem smaller now. “Goddamn it, Jess.”

But he’s snoring. And I shouldn’t be asking about her anyhow.

I spend the rest of the ride trying to figure out how to get the smell out of my car—and quick, because I have a fucking date tonight.

AUTHOR BIO:
Riley lives in the DC area and spends most of her time with her characters, playing with her toddler and husband, and pretending she knows how to be an adult. Former dancer. Current writer. Lifelong lover of accessories, books, and the beach. And cats. Can’t forget the kitties. Of which she has two.
You can also find her online:
rileyedgewood.com
twitter.com/rileyedgewood
facebook.com/rileyedgewoodauthor
GIVEAWAYS
Blitz-wide giveaway (INTL)
http://www.rafflecopter.com/rafl/share-code/ZDA0MjUxMjM1OGRlZWRmZWM1YmUyMmFkYTM3OWE5OjY5MQ==/?