#BookTour and #Giveaway: His Frozen Heart, by Nancy Straight

Author Nancy Straight will be touring His Frozen Heart from November 3-14, 2014. Join us for reviews and more! 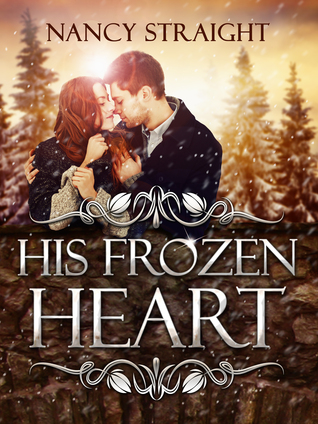 For best friends, Candy and Libby, money is tight with hardly enough to cover their living expenses. When they are desperate for grocery money, the girls bet on their pool playing skills to add to their income.

A simple wager on a quiet winter evening has devastating results, with a stalker determined to kill them both. With Libby in the hospital after a vicious attack, and Candy being pursued by the same stalker, she vows to find Libby’s attacker.

What she finds is Dave, an old friend with a secret past filled with misfortune. Will Dave’s past provide the answer to all of Candy’s problems or will it become Candy’s worst nightmare realized?

I had made a mess of things.  Dave had already tried to come to my rescue once today, which was before he knew anything of the chaos that was going on.  He’d gotten shot for his trouble, I’d probably given him a concussion on the drive here, and now I wanted him to go back to the lion’s den with me.  His hand cupped my face, forcing me to look into his dark brown eyes.  His thumb nimbly caressed the sensitive skin under my jaw as his fingers spread out on my cheek.  My eyes closed, allowing my senses to soak up his touch.

His simple gesture had captivated me.  Dave’s thumb continued to stroke down to the nape of my neck as I felt his breath close to my lips and could smell the wintergreen mint of his breath.  As my eyes opened, the intensity of his stare held me still.  I averted my eyes, embarrassed by the sensations rushing through me.  When I spoke, my voice sounded feeble, even to me, “I owe her.”

“She will understand.  She wouldn’t want you to put yourself in danger.  She would want you to stay where you are – safe.”  My hand raised itself to his, which was still cradling my face, his eyelids slowly closed as he leaned his lips forward brushing mine.  His kiss was apprehensive, as if he were silently asking me for permission.

My lips reacted to his, the suppleness of his lips lingered on mine as his other hand drew to my side and wrapped itself around me.  I had kissed plenty of guys, but most were more interested in shoving their tongue down my throat.  Dave’s kiss was different, like a cool breeze on a warm day, a seductive caress.  I leaned forward, pressing my lips more firmly to his as a dull moan escaped him.  He stood from where he had been kneeling on the steps, bringing me to my feet and guiding me back to the top of the steps.

My hands wrapped around his elbows, as I registered defeat at the top step, wanting to give in to the building desire welling up within.  As we both stood just inside his apartment, Dave’s arms encircled me, holding me to him as his breath danced across my neck in a heavy exhale.

I LOVE Starbucks’ White Mocha Latte and Mountain Dew, (but not together). I have a lead foot so I set cruise control when I drive, even in 25 MPH zones. I almost never win when I play Angry Birds, but have my 9 year old close, so he can clear the hard levels for me. I grew up on a farm and am opposed to eating fresh chicken (not opposed to meat – just opposed to any meat that was alive a few hours before lunch). I am a huge fan of the show, Big Bang Theory, on CBS. I share my life with two fantastic sons, three rotten dogs and a husband that I adore.Twitter: @NancyStraight